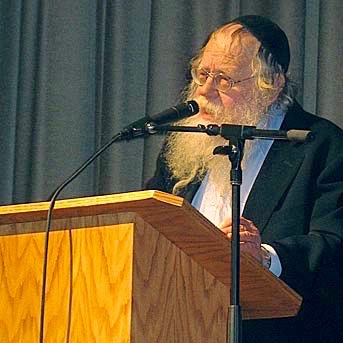 It is written in the Talmud that when one sees 600,000 Jews together, one should say a special blessing:

“Blessed is the Wise One of Secrets.”

This is because there were 600,000 opinions and nuances of disagreement at Sinai, and no book could speak equally to all.

Concerning this, it was said (Numbers 27:15-23) that Moses demanded of God that He choose someone with the Divine Spirit in him to go about and explain the Torah to each and everyone.

Someone with a Divine Spirit being the one who can understand each and every person and thereby direct his explanations accordingly.

Two living persons can commune together; one can teach the other by orienting himself to the other’s spirit.

If there is any barrier to their communion, such as a lack of understanding on the part of the listener, the speaker can adjust himself to the situation and overcome it.

Otherwise, he would not be fulfilling his role of teacher.

After all, what is the task of the spiritual guide?

Is it not to feel the state of mind of the listener, even while he speaks, and constantly take it into consideration?

The important thing is the act of comprehension, of genuine absorption. True, only too often this is lacking between two persons who are close.

But where there is more than one listener, the problem becomes increasingly complex.

An audience of many requires an adjustment which only the true leader can make.

He has to make himself understood by each one, as illustrated in the following story told by Solomon Maimon, who was not even a believer in the Chasidic Way.

He was a guest at the table of the Maggid of Mezritch, where, as he relates, the Maggid called each of the company by name and place of origin (without having been told beforehand, it seems) and then asked each one to quote a passage, whatever first came into his head.

Afterwards, the Maggid thought for a moment and delivered a sermon combining all of the disconnected passages quoted by the guests.

He did so with the greatest of ease and coherence.

What was most astonishing was that each of his listeners was convinced that the Maggid was talking to him, and only to him, in connection with what he himself had spontaneously quoted, and that it was in some intimate way profoundly related to his life.

This is a sample of what a Maggid was:

Someone who could speak (maggid) to all people, each one feeling that he was being addressed personally.