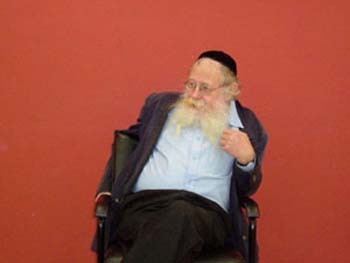 There is the story of an encounter between Rabbi Akiva and the Roman ruler of Palestine, Tinneus Rufus whom the Jews nicknamed Tyrannus Rufus.

This happened around the year 130 C.E., prior to the Bar Kochba Revolt against the Romans.

Rabbi Akiva was one of the greatest Jewish scholars of his age, and, in fact, of all ages.

The two leaders had a philosophical dispute, which on the one hand was connected with the spiritual collapse of paganism in Rome itself, and on the other, with the political friction between the Jewish population and the Roman rulers.

The Roman asked Rabbi Akiva which is superior: nature, or what people make of it—that is, what God does, or the handicraft of man.

Rabbi Akiva immediately answered, “What humans do is superior to what God does.”

So the Roman asked, “Can man create Heaven and earth?”

“No,” said Akiva, “we cannot create Heaven and earth, but when we speak about things that human beings can do, we do it better. Look at a stalk of flax on the one hand, and the piece of linen cloth that is made from it; look at a sheaf of wheat, and look at a loaf of bread. Which is superior?”

When the Roman came to this impasse, he asked, “Tell me, why are you circumcised?”

So Akiva answered, “I told you, what man does is better than what God does.”

Tinneus Rufus did not win the argument; he finished it later on by ordering that Rabbi Akiva be put to death.

Tinneus Rufus wanted to make the point that the natural world is superior, thus negating one of the basic premises of Judaism, that humans, too, bear a responsibility for this world, and that they are supposed, and even commanded, to make it better.

Rabbi Akiva did not allow him to develop his idea.

The Rabbi was not making a joke, nor was his just a tactical move.

The natural object is not necessarily the superior object.

The natural creature itself, the naked creature, is not always the superior creature.

The human that is dressed, and is therefore masked, is a different creature, and in some ways, a superior one.