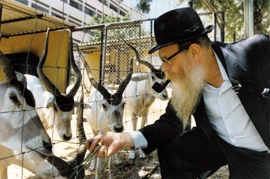 Faith is not the belief that God is to be found somewhere or other.

If God is here or there, in the past or in some distant holy place, His oneness becomes rather irrelevant.

It doesn’t really matter so much whether He is one or two or three or more.

The true unity of the Divine lies in the fact that there is nothing else.

There is no other force or reality or significant besides Him.

When a person tries to clarify this for himself, it becomes a victory of the positive reality of the world over the otherwise confusing hiddenness of the world behind the veil.

It is also a victory for God.

God rejoices in one’s success in overcoming the barrier to come to Him.

When one becomes sure that God is, that He exists, here and now, then the terror and the uncertainty are dissipated, and one can join in the adventure, or the play, of finding Him behind the partition.

Even the certainty that He exists is already a triumph of the highest order.