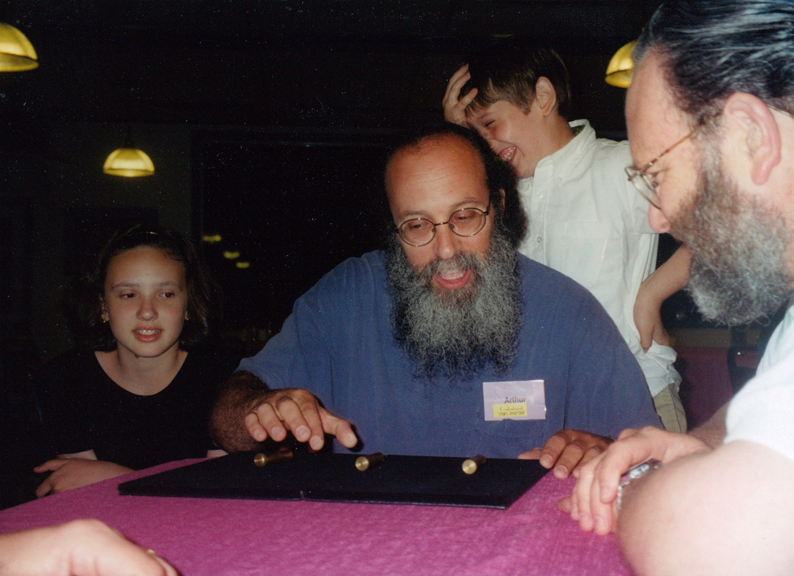 March 16, 2010 | 01:48 PM
Are you a fan of things magical or mystical? Then there’s something for you at Temple Isaiah this weekend. The annual Scholar-in-Residence event, March 19 through 21, brings noted author and speaker Arthur Kurzweil to Stony Brook for a three-day happening that will entertain and enlighten.

Kurzweil will address several different topics in a series of programs that are open to the public. He will offer ideas from Kabbalah — the Jewish mysticism that explores the meaning and purpose of life. He will provide an introduction to the study of Talmud in English, focusing on the inherent process of questioning that informs it. He will present a performance of insight and storytelling, combined with deft illusions for a magical evening. Finally, he’ll share his expertise as possibly America’s foremost expert in Jewish genealogical research, to help Jews of all ages begin to “climb their family trees.”

“I felt that the variety — Kabbalah, Talmud, magic and genealogy — would appeal to different groups of people in the congregation,” said Rabbi Stephen Karol, explaining Kurzweil’s appeal as a scholar-in-residence. “This weekend will be a combination of serious study and fun. And non-congregants might be interested in each of these topics because they may know a little about each one and this will be an opportunity for them to at least begin to learn more. In and of themselves, they are fascinating subjects. Each one can have some application to our lives — even magic!”

As for his motivation, Kurzweil says his favorite part of being a scholar-in-residence is “telling members of the Jewish family that we are the recipients of a profound, nourishing, amazing spiritual tradition.” It has been his life’s work and he’s been at it more than 30 years. The show he created, incorporating magic, isn’t just for ohs and ahs. It’s to make you think. “My show is a very serious discussion about some of the most profound ideas in Jewish theology,” Kurzweil said. “It just happens that I am performing some pretty cool magic tricks at the same time, which connect with the ideas being presented. It’s a fun show, but it is quite serious. Magic can be an effective teaching tool.” Ray Pollard, president of Ring 317 of the International Brotherhood of Magicians, wrote this compelling review of the Magic Show: “Mr. Kurzweil is an absolute delight. I am a professional magician and have been professionally trained, yet what Arthur did with us was something rarely seen. He was ‘edge-of-your-seat’ interesting. He was witty. He was endearing. He had a roomful of magicians so caught up in his stories and his personal revelations, that even we were fooled by his magic.”

Author of many books, and editor of many more, Kurzweil has gained much from his association with Rabbi Adin Steinsaltz, a noted scholar, philosopher, social critic and author. Traveling with Rabbi Steinsaltz on his frequent trips to the United States, Kurzweil gathered enough wisdom for two books so far. The first, published in 2006, was “On the Road with Rabbi Steinsaltz: 25 Years of Pre-Dawn Car Trips, Mind-Blowing Encounters, and Inspiring Conversations with a Man of Wisdom.” The second, published recently, is “Pebbles of WISDOM from Rabbi Adin Steinsaltz.” Kurzweil is also the author of two books in the “for DUMMIES” series on the subjects of Torah and Kabbalah. And he is the author of the seminal source on Jewish genealogy: “From Generation to Generation,” which carries a foreword by Elie Wiesel.

“Twenty Ideas from Kabbalah that Can Change Your Life” will be presented during Friday evening services, which begin at 8 pm. On Saturday, there will be a lunch seminar beginning at 12:30 pm titled, “I Can’t Read Hebrew, I Never Went to Yeshiva, But I Want to Study Talmud: An Introduction to Talmud Study in English.” Participants may bring a bag lunch. On Saturday evening at 7:30 pm, a performance of  “Searching for God in a Magic Shop” will be followed by a dessert reception. Suggested donation is $18 per adult. There is no charge for accompanying children (ages 10 and older).

A Sunday breakfast program, “From Generation to Generation: How to Trace Your Jewish Genealogy and Family History” is free for congregants. There will be a $5 charge per person for non-congregants.

For more information about any of the weekend’s programs, for directions to Temple Isaiah, or to make reservations for the Saturday night Magic Show or Sunday morning Breakfast Program, please call the Temple office: 751-8518. Temple Isaiah is located at 1404 Stony Brook Road in Stony Brook.