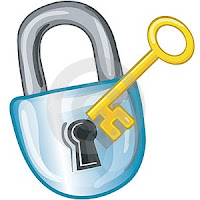 “Although the patriarchs intuitively observed the entire Torah even before it was given, once it has been given, we must follow its directives rather than our intuitions, because the Torah has become the pattern of the rectified world.

It is the key, the map, in which reality appears as it should be, in which God Himself appears, without the constriction and the distortion of the created world.

As a rough analogy, a lock is built in such a pattern.

It contains a row of teeth that are out of alignment, that are purposely ‘distorted,’ as it were.

The key that opens the lock has a configuration that fits with teeth in the lock, making it possible to open the lock.

To a person who does not have the key, the door remains closed.

To a person who does have the key, the door is open.

The existence of this world is closed, and we cannot see the divine beyond it.

There is no direct connection between one level and the next leading directly to God.

But the commandments create a direct link between the created and its Creator, with a direct connection to the highest point, with no distortion.

In this sense, the performance of a commandment completes the wheel of creation.”

From Learning from the Tanya by Rabbi Adin Steinsaltz