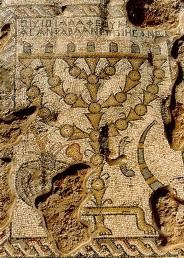 The tzadikim in the Garden of Eden ‘bask in the light of Shekhinah,’ and even God Himself is ‘my light and my salvation'(Psalm 27:1).

Hence, too, in the language used by the kabbalists, all of reality is ‘lights” and “enlightenments,’ all the way up to ‘the light of the Infinite.’

This light metaphor is not only an abstract and intel­lectual one.

Light is even personified—it enjoys its own ex­istence—’The light of the righteous rejoices’ (Proverbs 13:8).

The way in which human beings relate to light, too, is emo­tional, almost sensual—’Truly the light is sweet and a pleas­ant thing it is for the eyes’ (Ecclesiastes 11:7).

The symbolic meaning of light as an expression of the positive aspect of reality is not confined only to the realm of language.

It is realized also in the use of light and lamps as concrete means of expression, which symbolize and point to an essence that contains holiness, in all its different appearances in reality:

In holiness and at the Holy Temple;

In the sanctity of place;

In the Sabbath and festivals—in the sanctity of time;

On special occasions—in the sanctity and importance of the event.

menorah, with all of its ornate and extremely elaborate craftsmanship, was not there for any practical purpose.

From On Being Free by Rabbi Adin Steinsaltz