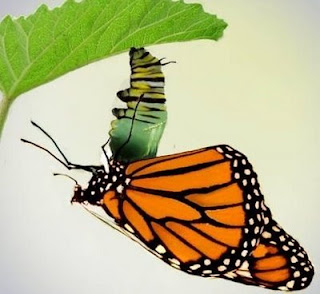 “There is an image, found on a tablet from the Minoan culture in Crete of some four thousand years ago.

On one side of the tablet is a drawing of a person walking, then of a person lying down, apparently dead, and a small bird­like figurine, which probably represents the soul.

On the other side are a caterpillar, a chrysalis, and a butterfly.

There is no way to determine the tablet’s original in­tent; to my mind, however, it seems to be depicting pre­cisely that dramatic change.

For the caterpillar, changing into a butterfly is exactly the same as dying is for hu­mans.

In other words, the caterpillar cannot imagine life as a butterfly.

When the caterpillar goes into the chrysalis, it dies; in a sense, it ceases to exist as a caterpillar.

Neither of the two stages is understood by the other.

That image—whether the Minoan stone intended it as such, or it is just my interpretation—is a rudimentary portrayal of what happens at death.