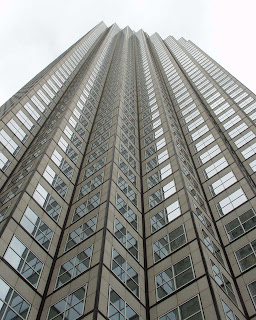 “Every human being lives in more than one world.

In some ways we are always living in more than one world, almost by definition.

More than that, some of us at least have a grasp, to a greater or lesser extent, of some existence that is beyond the purely mental plane of existence, and occasionally find a way to a world or worlds above us.

But usually for most people, existence is just the “am­phibian” state between the purely material and the mental-emotional.

There are people who can achieve a state beyond this more perfectly, but it is perhaps only once in a generation that someone like this may appear.

As it is, it’s as though I inherited a skyscraper and I’m living only on the first story, or sometimes even below, in the basement.

I think each of us inherited the whole building.

Most people stay in the basement, some people climb to the first story, some go higher still.

We know that even climbing a mountain in a quite ordinary way requires a great deal of hard work.

And in relation to the climb we are speaking of, even though the potential is inborn, it needs a huge amount of training.

In another kind of example, human beings seem to have the inborn ability to learn to read and write—a very abstract and complicated ability, but every human being possesses it to some degree.

Still, there is a necessary period of turning this poten­tial into practical ability, even though there is the capability inherent that makes it possible.”

From The Strife of the Spirit by Rabbi Adin Steinsaltz