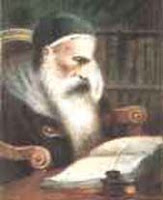 “There was never a sepa­ration of any real consequence between the daily obliga­tions and open practice of Judaism and the esoteric or mystical aspects of the tradition.

They have always been connected.

They are simply different aspects of the same thing.

In the Middle Ages many scholars leaned almost entirely on the writings of Maimonides and pointed to his Thirteen Articles of Faith as the supreme theological au­thority.

But even in those times there was more than one approach to theology.

For example, we also have the more mystical approach of Rabbi Moshe ben Nachman (the Ramban).

But since there was no central authority to define a consensus of opinion, the differences—which, as intimated, were never as polarized as modern thinkers believe—were allowed to flourish.

It is only since the sixteenth century that there has been a consensus accepted by almost every Jew.

If there is a normative Jewish theology, it is the inte­gration of the two (never really separate) approaches—the Kabbalah of the Ari and the Shulhan Arukh of Rabbi Joseph Caro.”

(illustration of the Ramban)