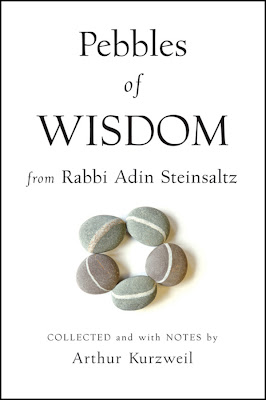 From the Introduction
by Arthur Kurzweil

When I speak in public or meet a person who learns that I am a serious student of the teachings of Rabbi Adin Steinsaltz of Jerusalem, I am usually asked to say something about him.

Or I say, “Rabbi Steinsaltz is an Orthodox rabbi, and in fact is considered by people who know far more than I do that he is one of the most brilliant and is destined to be one of the most important Jewish scholars and teachers in history. In one of his books, Rabbi Steinsaltz writes, ‘If you think you’ve arrived, you’re lost.’ ”

And at other times I say, “Rabbi Steinsaltz has done something that has not been done in one thousand years. It is not since the great biblical and Talmudic commentator Rashi that any one single individual has written and published a comprehensive commentary on the entire Talmud. And it is considered a masterpiece and work of genius by people who are experts. His motto is ‘Let my people know.’ ”

And he said, “Many people come to me to talk privately and many of these conversations are confessions of sins. So I have heard lots of confessions. I have to tell you that people haven’t invented a new sin in the last three thousand years. Sometimes you wish to hear some new combination, some new idea. But you never find it. ”

He also said, “I grew up in a family where neither my mother nor my father went to synagogue. Not even on Yom Kippur. My father said that he did not go because he has too much respect for the place. He said—and I completely agree with him—that the synagogue is not a theater. Either you are a participant or you don’t go there. Because he could not be a participant, he would not go to watch.”

And then he said, “My father was not particular about eating kosher when he was in Israel. But whenever he was abroad he always ate kosher just for everyone to see. He was proud of being a Jew and of Jewish knowledge. When I was ten years old my father hired a tutor to teach me Talmud. My father said, ‘I don’t mind if you’re an atheist, but I don’t want any member of my family to be an ignoramus. It is a shame for a Jew to be an ignoramus. Perhaps it is the lowest of the low that a Jew can reach. It means he lacks some essential knowledge about himself. Imagine that a person does not know that he has a head until he is sixty-five and that he discovered it accidentally. That is the kind of feeling that results from a Jew being ignorant.”

A number of times over the years I have mentioned to Rabbi Steinsaltz that in his lectures, interviews, and writings, there are always such wonderful “gems,” embedded within the transcripts and essays, and I find myself repeating these “gems” to people.
“Perhaps not ‘gems,’ ” he responded. “Maybe pebbles.”

So, for nearly thirty years, I have been collecting pebbles from Rabbi Steinsaltz.

The metaphor works. A pebble can contain a gem. A pebble might be tiny but can be of great value. A pebble, used properly, can be quite effective. David killed Goliath with a pebble. The Zohar says that David had originally put five pebbles into his bag but that they miraculously became one.

The pebbles in Parts I through VI of this book are all from unpublished sources. In the Notes section, I have collected additional pebbles from published sources that relate to the unpublished ones. I have done this for two reasons: (a) to offer a lot more pebbles to the reader, and (b) to send the reader to Rabbi Steinsaltz’s published works to see how the ideas in the pebbles are expanded—and to then discover even more pebbles, as well as lengthier pieces and more fully developed ideas.