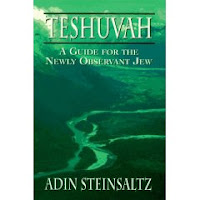 An interview with Rabbi Steinsaltz was published in the French magazine, Le Petit Hebdo shortly after the publication of a French edition of Rabbi Steinsaltz’s book, Teshuvah: A Guide for the Newly Observant Jew.

Grateful thanks to my friend, Rabbi Pinchas Allouche, Spiritual Leader of The Sephardic Cultural Center in Scottsdale, Arizona, who was kind enough to translate the interview for the benefit of readers of this blog. Rabbi Allouche’s father, Michael Allouche, is the translator of several of Rabbi Steinsaltz’s books into French, including Teshuvah.

An Encounter with Rabbi Adin Steinsaltz

Le P’tit Hebdo : You have written many books on Judaism. What is the goal of your book Teshuvah, which has recentely been translated to French?

Rabbi Adin Steinsaltz : The preface of the book indicates the goal of the book clearly. It is not a book that aims to preach in favor of Teshuvah. Rather, it was written to help all Jews, close or distant, who strive to return to Judaism, by asking: “What shall I do today to succeed in returning home?” My basic assumption is that the reader of this book has already developed a minimum level of interest in Judaism. But for those who have absolutely no interest in any attribute of Judaism, I have other books to suggest. L.P.H. : Your books are translated to many languages including Chinese and Japanese! How can you ensure the authenticity and accuracy of the translation?

Rabbi Steinsaltz: Obviously, I do not master all languages. All I do is simply try to find a good translator. Initially, Teshuvah was written in Hebrew, and shortly after it was translated to English. I know the author of the French translation, Michael Allouche, very well. He has already translated some of my additional books. The subject of the book also interests him personally, and he expresses himself nicely. I think that the French translation is very good, probably even better than the translations in other languages.

Rabbi Steinsaltz: Certainly. This book does not strive to replace the Code of Jewish Law, which is indispensable to the Jewish home, although it is also very hard to understand for a newcomer who lacks a permanent guide or a teacher. This resembles a classical French Restaurant where the new customer cannot comprehend the complicated names of the various dishes which are offered on the menu. In this book, I simply tried to explain the names and content of the many dishes that Jewish life offers. I have tackled questions, such as: where to begin, what should one study, what constitutes “Kashrut”, Shabbat and the Jewish Holidays. For it is often difficult for Rabbis, or Jews who were raised observant, to perceive the level of ignorance that exists in a Jew who was distant, and to understand the elementary questions that he may face.

L.P.H. : Did you focus on the practical aspects of Judaism?

Rabbi Steinsaltz: In truth, that is an understatement. This book starts by reviewing the essence of teshuvah, and its particularity in the modern world. Besides the practical aspects, which I also wrote about, I have also tackled the “psychology of teshuvah”; the natural and personal struggles that rise deep within a person’s being. Every baal teshuvah undergoes several crisis, which I describe in the book : problems of faith, the relation to his past, or the sometimes disappointing encounter with the religious community. The baal teshuvah, who is determined to change his life whilst continuing to live in this very world, must learn how to relate to his own family, his social and professional environmnent .These are the domains that I dwell on in this book, hoping to furnish a precious guide to those who are willing to make this step.

L.P.H. : In addition to your occupation as an author, you are also the dean of educational institutions, that incorporate a unique approach. Your school in Jerusalem, Mekor Chaim, is extremely successful, notably among the ‘olim’ from France. Is it hard to meet and satisfy all of the demands of the school?

Rabbi Steinsaltz: Each year, we receive 150 applications for a class that can only contain 30 students. The selection of students is thus harder than the selection of students in universities! I hope to, one day, expand my establishments, but the political promises currently remain in the realm of nice words. We favor the “olim chadashim” in the selection process. If the motto of France is “Liberty, Equality, Fraternity”, ours uses words that are slightly different: “Quality, Religiosity, Identity.” We strive to not only instruct, but also to educate our students. Hence, the cooperation of parents is crucial, and for many, Mekor Chaim seems like a large and beautiful family.

L.P.H. : Are you optimistic about the current situation in Israel?

Rabbi Steinsaltz: If you were trying to make me state that the situation in Israel is “good”, I will of course, state that it is far from good. Nevertheless, I am an optimistic Jew, yet with a Jewish definition of optimism. In the 18th Century, there was a great dispute between Leibnitz and Voltaire concerning the type of world that we live in. Leibniz claims that “we live in the best possible world” Voltaire, in Candide, reached an opposite conclusion: “We live in the worst possible world”. In my opinion, the Jewish response to this dispute is as follows: “We live in the worse of possible worlds, in which there is still hope.”

L.P.H. : Is this statement based on mystical sources?

Rabbi Steinsaltz: Yes indeed. This quote stems from the teachings of Chaim Vital, the disciple of the Arizal, in his book Etz Chaim. Evil, he teaches, is the ruler of our world, as it is the world of “Kelipa”, a term that is used to describe the concealed presence of God, thus forcing the good to exist as a minority. Yet man has the power to repair the world and transform it into a world of holiness (“Kedusha”). It is thus not surprising that this book also depicts the Messianic era as the culmination of our work to transform this world into a world of holiness. Without a doubt, this is the calling of the Jewish condition: Having complete faith in God, while, at the very same time, working tirelessly to bring about the revelation of God and the ultimate redemption.