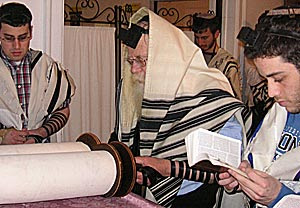 “There is a scriptural correspondence to every mitzvah.

And yet the connection between Torah and mitzvot is not at all that simple.

The question asked by the ancients, for example, was: Which precedes?

Is the Torah the instruction and means of the mitzvot or are the mitzvot instruments enabling us to reveal the Torah?

The idea, of course, is to bring light; it is not only a theoretical question of principle and practice.

What, after all, is the role of theory; what is its importance against the actuality of practice?

To illustrate: There are instruments that perform complex operations; sometimes the operations are so complicated that they can make conclusions in the realm of theory.

In fact, laboratory equipment exists not for its own sake, but to help gain conclusive evidence for the theory at the basis of knowledge.

Some cyclotrons of research are not only huge and very expensive toys intended to provide information about the tiniest of particles; they also help to create theoretical conclusions about the nature of matter.

Similarly, one could say that there is a great mitzvah with lots of details, such as Shabbat.

The tractate Shabbat (theory) is thus the principal instrument to gain knowledge of the mitzvah (practice).

It is only theory — the mitzvah is what counts.

The Torah is only an accompaniment, that which comes to surround and explain the mitzvah.

Or else, one could say that the mitzvah is the essence, and the Torah is that which flows from it, giving it a certain form.”