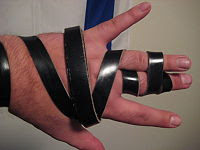 Kabbalah is a kind of a commentary on the mitzvot, on the meaning of the mitzvot.

The feeling, the enjoyment, and the result are not entirely connected.

For example, sometimes the sexual act, creating life, is enjoyable; sometimes it is less enjoyable.

The enjoyment has no real connection with either the fruitfulness or with the meaning of the process.

That is one side.

On the other hand, any kind of mitzvah is basically a communion, a binding of oneself with God.

Sometimes I enjoy this act of being bound.

Sometimes I don’t enjoy it.

My enjoyment or lack of enjoyment doesn’t change the fact very much.

Sometimes I don’t get it right.

But again, it doesn’t matter so very much.

My enjoyment is a kind of enticing force of doing things, but this is just a small part of the real deed, which is the creation of some kind of connection between man and God, and this is the meaning of a mitzvah.”

From a lecture by Rabbi Adin Steinsaltz in New York City.